An ancient Ancient Literature professor once told me,

“There have only ever been two stories: The Iliad and The Odyssey.”

The expanded claim was that all other stories have been mirrored reflections of those two, the characters and details might have changed, but the structure of the plot was essentially the same: either a conflict between a protagonist and an antagonist, or an adventure in which the protagonist is forced to leave home, overcome great trials, and return a changed hobbit… err… individual.

And my literature professor was not the only one to make such a claim.   Joseph Campbell’s idea of The Hero’s Journey, also known as The Monomyth, is another attempt at examining what makes a good story by examining the common attributes of story structure.   In his video Every Story is the Same, YouTuber Will Shoder explains the monomyth and the more recent Story Circle concept by Dan Harmon in similar terms.

Without a doubt, many stories will fit into one or more of these time-honored patterns if explained in the right way, but the very idea of story has continually expanded throughout history to encompass humanity’s latest communication methods.

A Whiteboard History of Storytelling

Stories have been crafted in so many different modes throughout history that examining the concept of story itself at any but the most fundamental level can be overwhelming.   This may be the reason that people tend to want to simplify and explain all stories in terms of a common or even universal structure.

Nevertheless, the real question is: irrespective of delivery method or date of creation, what makes a story good?

The first factor in determining the depth of a story’s worth is whether or not it resonates with reality.    –me

This is not to say that the more closely a story is connected to reality on its surface the better it will be.   That would make nonfiction stories invariably superior to their fabricated brethren.   Rather, it is the overall message of the story (and each of its component parts) that must connect to the true realities of life and reflect them back to the audience.   The purpose of this connection is twofold: to be relatable for understanding, and relevant for learning about life.

Theme as it relates to story is a slippery concept for high school students.   Most of them seem to want to use it like you would use a motif (e.g. the theme of the prom this year is Neverland) or a topic, such as love.   Whenever I teach the concept of Theme to a group of freshmen in English 9, seniors in Pop Novels, or a mixed group in Video Production, we begin with discussion, narrowing the definition by first pointing out some of those misconceptions and why they don’t work when applied to narrative.   Eventually, we wind up with something akin to this definition, cobbled together from many years of reading and discussion:

The theme is the primary message about real life conveyed through a story to an audience.

The truly important point here is that it has to be a message about real life.   The theme of Star Wars episode IV cannot be “Let the wookie win” because wookies don’t exist in the true reality in which the audience lives. 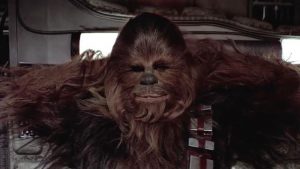 While it is humorous dialogue, and it may have a deeper symbolic meaning that could work as a theme, when taken at face-value the statement “Let the Wookie Win” doesn’t resonate with our understanding of real life, or give us any new information on which to better understand a core truth of the world around us.

In contrast, something like “Oppression of the weak by the strong will eventually lead heroes to rise up and fight back” as a theme for Star Wars, A New Hope would fulfill the real-life requirement.   It does fit within the bounds of the audience’s reality and it also gives them a feeling of hope that when everything seems hopeless, someone will step up and set things right.

One way of narrowing down to a particular theme for discussion or analysis with a group of students is to to ask what feelings the story brings out in an audience and then asking what the story says about that concept.   Feelings are a good tool for a storyteller, because they are near-universally relatable, giving the story a measure of credibility with an audience, and jump-starting emotional investment in a story.

Pixar is an example of a modern storytelling company that has perfected this use of feelings.   Pete Docter, the director of some of their most famous and successful films explains the importance of of feelings in storytelling this way:

Pixar in a Box: Intro to Storytelling

Because each member of an audience is a character in their own story, and they experience feelings on a regular basis, the use of relatable characters are often the primary means of conveying feeling to an audience throughout a story.

In order for a story to be good, the characters involved must be believable.    They must speak and act in a manner consistent with how the audience has interpreted their character thus far in the narrative.

It is not absolutely necessary for the audience to personally identify with the main character, although this is a technique often used by storytellers.   It is enough that the audience knows someone who might have acted the same way, were they placed into similar circumstances.   This believability helps an audience to empathize with the characters and experience feelings alongside the characters by entering into the story.

Luckily for the storyteller, audiences will often engage in “willing suspension of disbelief”, a phrase coined by Samuel Taylor Coleridge in 1817.   It means that despite fantastic or unreal elements of a story, the audience may follow along in order to uncover the truth embedded in the story by the storyteller.   I have always found that the more fantastic some elements of a story, the more powerful the truth has to be for me to willingly suspend my disbelief.

An audience necessarily brings a personal and cultural context to any story that they are exposed to.   This can include things like when and where they were born and the shared experiences of members of their generation, or more personal experiences such as loss of a family member during their youth or great success in a risky business venture.   These personal and cultural contexts mean that some people will find the content of a story good while others won’t, either from lack of understanding or empathy, because it too far removed from their context.

It also includes the other stories that people have experienced throughout their life.   Related stories can lend each other contextual credibility.   Imagine reading the final book in a series or watching a tv show from the middle of a season before experiencing any other parts of the story.   Even if the story was excellent, the investment and understanding by the audience would necessarily be curtailed because they hadn’t experienced the fullness of the story that someone who began a the beginning would have.

Truly, this phenomenon of contextual understanding makes the time-honored stories which have survived centuries or millennia since their creation even more impressive.   While Star Wars and Harry Potter sometimes seem culturally all-pervasive, they have not truly stood the test of time like Dickens, Shakespeare, or Homer.   Maybe if they are still around and popular in a few hundred years…

The second element required for story excellence is a dynamic delivery.

The available methods of delivering a story change dramatically from one era of human history to the next, but a good story partially depends on the confidence of the storyteller and their ability to use their own personality and style to energize what would otherwise be a static experience.   A great storyteller can even make something engaging that is usually mundane, like taking a shower while traveling.

Jerry Seinfeld, I’m Telling You for the Last Time clip.

Successful stand-up comedians might be the best possible examples of this.   We relate to their content because it nothing less than the minutia of real life that we often take for granted, the stories of everyday life that we have all experienced, but never noticed.   The delivery is really what makes it good.   Dynamic delivery breathes life and energy into a story and makes it stand up and dance around for the audience.

If someone unpracticed in storytelling were to attempt to write the same shower experience as Seinfeld above, it might read something like this:

last week I went on a business trip and stayed at an airbnb.   While i was there, I burned myself because i couldn’t get the temperature right on the dials.   I also found a hair in the shower.   It was disgusting!

While this might be a true and relatable experience, it still isn’t a good story because of the lack of dynamic delivery.   This is true of all mediums in which a story can be told.   Lackluster delivery (unless perfectly executed for ironic effect) will be the downfall of any story it is used to tell.

I created a video to go here, but WordPress doesn’t want to use it, so here is a link to it in Google Drive.   Hopefully we can make it work after a peer review.

Maybe my delivery could be more dynamic, but I’m working on it…