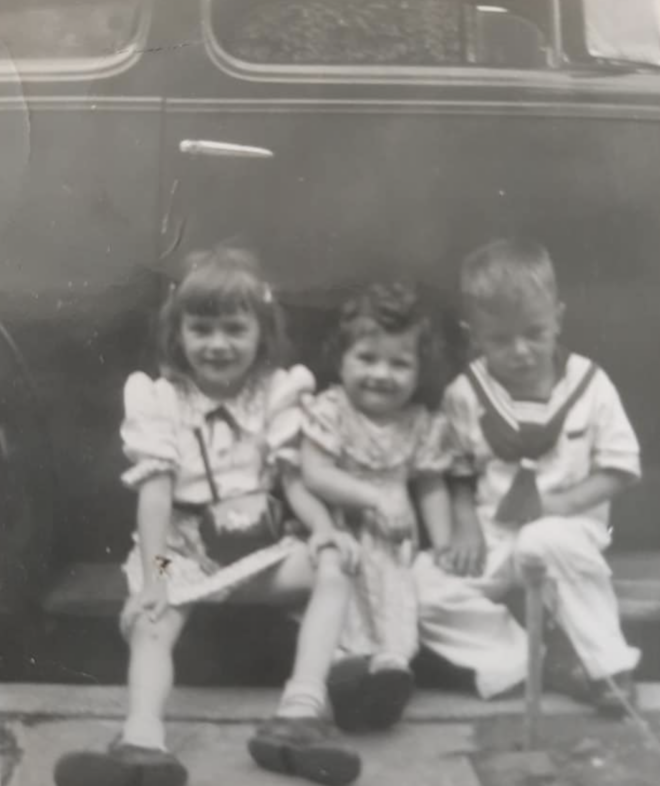 When I think about stories, I think back to my childhood and curling up with my mom and reading a story before bed. We did this most nights and I continued this tradition with my own children. We read the traditional stories that many children learn at a young age, nursery rhymes, fables, and picture books. I was particularly drawn to stories that had fairies and castles. However, the clearest memory I recall is getting the book Paddington when I was in kindergarten from my dad, because we had a class teddy bear named Patrick and it was the closest he could come to that.  15 Years later my dad bought me a Paddington bear when he traveled to New York City.  My oldest son loved that bear when he was young, so I began sharing the books with him. He still has his collection and even sewed himself a “Paddington bear” as a book project in 3rd grade (we still have it). My youngest sat through the same stories, but didn’t form the same connection to those stories. Although he is much more the story teller and reader than his brother has ever been. Instead he bonded to Calvin and Hobbs.

So what then makes a good story? What does it need?  I first reflect upon the differences between myself, and my own children. It makes me wonder if there is truly a concrete formula. Maybe it is more a personal inclination. Some people are just more drawn to one type of story over another. Does it come down to personality?

In chapter one of The New Digital Storytelling: Creating Narratives with New Media, Alexander, explains that most commonly a story consists of an introduction, rising action, climax, falling action and a denouement.  We even teach it this way in school. We teach about writing about characters who face a problem, the problem peaks and then there is a resolution, and identifying these parts in the stories we read. Does that make the story good though?  I think it just makes the story flow. Not necessarily good.  I can honestly say it isn’t something I even thought about when I was putting my story together. Maybe it is something that naturally happens when we are writing about a person? However, I don’t believe there was a true climax in my story. Could that be because I left things out? I never pointed out what to me was my father’s lowest moment before he went on to be incredibly successful.

Alexander also points out that stories engage the reader and have meaning.  I will concede that a prefer a story that I can create meaning from.  This is where I begin to view the concept of a good story as being more determined by personality or from personal experiences. Personal experiences will determine what you connect to or what has meaning to you. maybe I am getting too wrapped up in details and not looking at the bigger view. We all tend to understand overcoming obstacles or challenges. We all generally connect to themes about family and relationships. Many stories seem to include those somewhere in there even if it isn’t the main storyline. I tend to look at the details of the story. Who is the character can I see pieces of myself reflected in them? Have we faced similar adversities? However, a week later I might be reading a murder mystery and love it just as much!

Zak points out that one of the ways to keep and audience engaged with a story is to keep the tension rising. People face challenges every day in life and we can typically relate to the emotions associated with the increasing tensions and anxieties that characters may face. This also ties into the concept of sequencing discussed earlier.

Another key feature that Zak shares if that good stories can transport us into them. By captured an audience’s attention long enough, a person begins to emotionally connect to the story’s characters. Emotional simulation is profound for social creatures as it allows them to read the emotions of those around them. In a study conducted by Zak, he found that character-driven stories do consistently cause oxytocin synthesis. This Oxytocin release makes people for aware of the social cues around them.

Zak also explains that stories can change our brains. This is in part he says because we are social creatures and stories are an effective way to communicate values and information between people and communities. I think this is evident in the way cultures embrace their traditional stories and continue to pass them along. I’ve heard people say “we don’t have any traditional stories.”  Well, we do. Paul Bunyan and Johnny Appleseed are two examples. They may not be the same some of the traditional stories of other cultures, but they are ours.

Cormick explains that the role of culture is also an important consideration in stories. Different cultures will view symbols differently.  Traditionally most heroes in stories are males who overcome multiple setback to finally conquer the obstacle. This is evolving though and we are seeing more female hero’s cunning to overcome challenges. This makes me wonder is the change influenced specifically by culture of do powerful stories influence society?

Does my story fit this bill?  I’m not sure. I struggled to put this together, because there are a lot of details that I left out. I didn’t go into the types of abuse suffered with in the family and that fact that he was forced to watch it. This would have evoked more emotion from people. I didn’t feel it was necessarily needed for the project and would have crossed a line I don’t think needs to be crossed.

I also lacked images. I had to screen shot many from my brother’s Facebook page, as my family is all in NY and of course I am here in AK. I was able to find his Vietnam Photo online, which was awesome. However, I do think that given the resources I have that I was able to create a sense of time establish a general image of his life.  I believe that this helped to establish a connection between the story and the audience.

I don’t feel this is a complete project…..I didn’t necessarily have an audience. Potentially my children, who only recall Gramps who came up and took them to the zoo and got the “world’s biggest polar bear and dog” their last memory is when they were 7 and 9 and he flew us home to visit a month before he passed away. They still talk of him, but never knew him.  In order to fully encapsulate who, he was, it would need to be worked on and expanded on.

I didn’t have a “biography” fully in mind, it was also a questioning of life, thus the beginning reflection of what is it that determines our life’s path and the revisit to the topic. So, I didn’t have a concrete direction. I know what I want but it wasn’t fully polished. I would say I’m in conceptual stages still.

The more I reflect on this connection with my own children I also begin to wonder on how could the story have been put together differently. There are many correlations between our lives that never would have happened or maybe are just coincidental. My father ingrained his love of music in me. Which I in turned shared with my kids. My oldest ironically attends RIT, which he didn’t know about the connect between RIT and his grandfather until after he was accepted. I think there are ways to make the story more interesting.

This leads me back to did I create a good story? I suppose it will depend on who you ask. I know I could probably improve it. I think it contains some of the features that might identify is as a good story. It has a character facing challenges and overcomes them, I think it is relatable. Do all those things really matter though. Deni points out in her post “Stephen King describes that fiction writers “don’t understand very much about what they do—not why it works when it’s good, not why it doesn’t when it’s bad.” (11) So maybe it’s ok that I didn’t have every characteristic of a good story. The fact is I wrote it and maybe it just needed to be written.